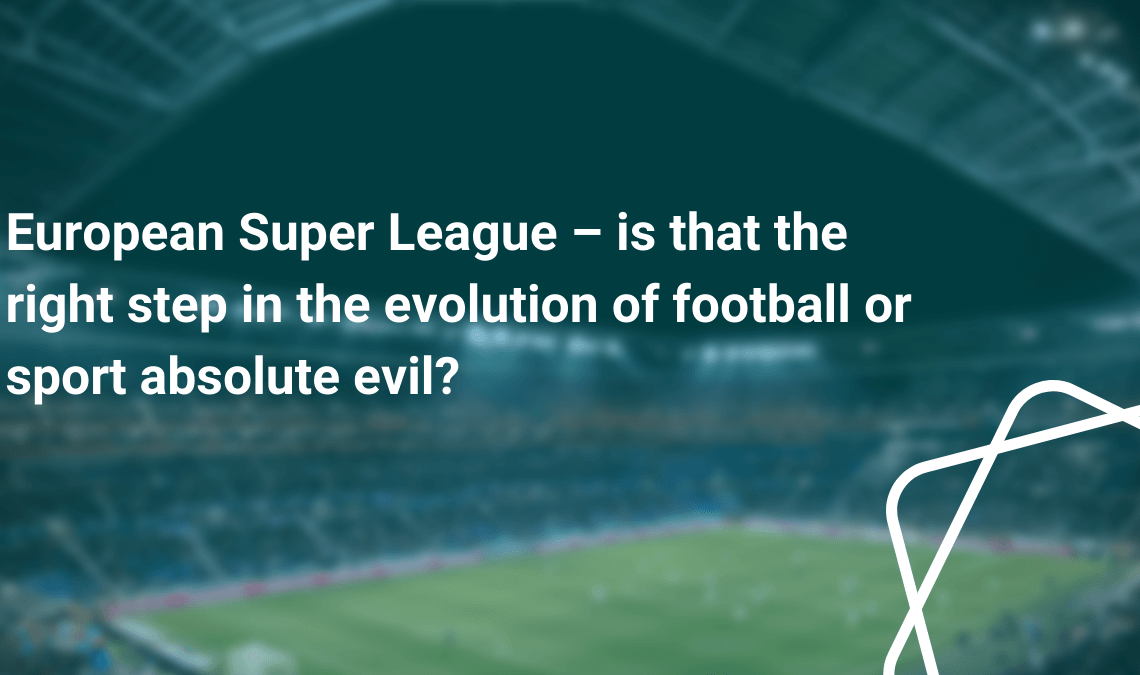 European Super League – is that the right step in the evolution of football or sport absolute evil?

What is the European Football League?

After years of negotiating, the European Super League has been finally officially created today.

It is a newly launched football tournament that will not be overseen by UEFA. The first chairman of the board is Real Madrid president Florentino Perez (not a surprise). AC Milan, Arsenal, Atletico Madrid, Chelsea, Barcelona, Internazionale, Juventus, Liverpool, Manchester City, Manchester United, Real Madrid, and Tottenham Hotspur have all joined as founding clubs. Three other founding members have not been announced yet.

The sport aspect of ESL:

• The league will consist of 20 teams.

• 5 football teams will be qualified annually according to their domestic achievements.

• The top 4 teams from each group will play in head-to-head matches, just like in the Champions League, but on a neutral field.

• The first tournament starts in August this year. The matches will be played in the middle of the week, so they can be held alongside the traditional domestic leagues.

•  ESL will ensure strong economic growth in European football through long-term payment commitments that will grow in line with the league income.

• These payments will be significantly higher than those generated by the current European tournaments and are expected to exceed €10 billion during the initial commitment period.

• In return for their commitments, the founding clubs will receive € 3.5 billion of support to invest in their infrastructure and compensate for the effects of the pandemic.

Controversial side of ESL

Shortly, the main goal of the ESL is to create a tournament that lasts the entire season in terms of intensity and number of matches, and is similar to domestic national championships, with teams that are the most popular in the football world and have the best marketing.

This fact caused a flow of emotions and heated discussions among football fans, and of course, a lot of criticism from organizations like UEFA, world football competition monopolists.

It was interesting to read the official statement of  MUST (the largest MU fan group) on the establishment of this tournament, in which they described the tournament as  “a closed shop of self-selected wealthy clubs” and urged MU not to participate because of the risk of ceasing to play in the Champions League.

For me, as a MU fan, such a reaction from the football world is quite understandable. The establishment of the ESL contradicts the principles of fair play and the “old school” idea that football clubs should represent their city, history, and emblem instead of competing for telecast contracts.

Also, this brings me to the realization that football is evolving. And no matter how sad (or fun) the situation is, it is evolving towards commercialization. Of course, this did not happen in one day, and the main cause was the creation of the European Super League.

For example, in 1968, George Best (Manchester United striker), one of the first celebrity players (who was almost as popular as the Beatles), earned £ 1,000 a week. Today, the salary of the goalkeeper of the same club, David de Gea, is £ 375,000 a week. Even taking into account the maximum inflation, it is a tremendous increase in wages, “to the moon”.

And I did not even mention Ronaldo, Messi, Neymar, and other most popular players and their advertising contracts. I also did not mention the games of football agents, and the hairstyles and style of football players, which they sometimes care about more than about the emblem of the team they play for. I also did not mention the fact that immediately after the announcement of the ESL tournament, the shares of Juventus (which is one of the main initiators) rose in price.

ESL is a contradictory topic for discussion. Any changes that destabilize the current state of things, are always very difficult to be perceived by the majority. In my opinion, ESL is just one of the evolutionary steps that European football has taken in the context of new realities of the football market. While it is only the beginning of the new chapter in football history, it is still hard to predict what lays ahead of the ESL. There probably will be enough noise, protests, lawsuits, but the outcome will probably be that the fans will have another European football tournament to watch, and football clubs will have another source of income. Or in another case, clubs will negotiate and readjust their relationships with UEFA.

By Yuliya Datsyuk
3 Mins read
Sean le Tissier is a British entrepreneur and founder of Coffee King, an innovative startup that rethinks the coffee culture. Sean recently visited Lviv and KindGeek. In this talk with Sean, we covered the Coffee King story as well as cooperation with KindGeek.
BlockchainBusinessFinTech

By Yuriy Gnatyuk
3 Mins read
What is BitClout? Who would have thought that 2021 would be so rich in new social networks? We haven’t even had enough…
BusinessFinTechSoftware OutsourcingTips