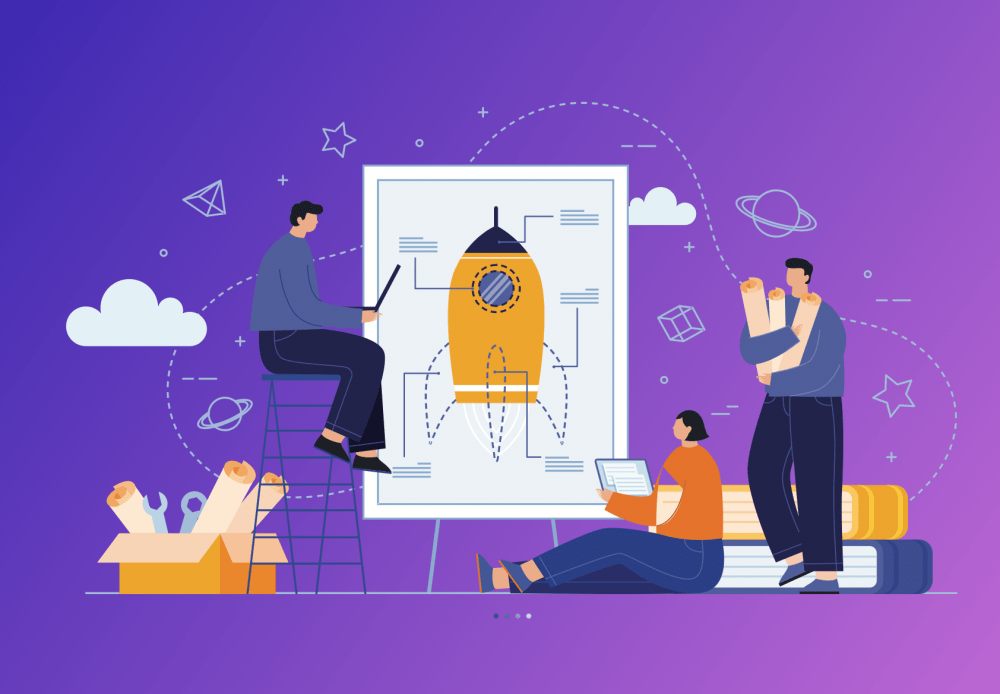 The UK’s information technology industry is a force of nature with £184bn of turnover and almost $8bn invested in tech startups in a single 2018. Moreover, in 2019, the investments in the tech sector reached $13bn, showing significant growth regardless of political uncertainties the country faces. Considering that the United Kingdom is among the global technology leaders, it’s quite possible that the next “Amazon//Google/[Insert tech giant of your choice here],” which will change the digital ecosystem forever, is currently rising to its feet on the Kingdom’s islands.

In this article, we gathered the diverse Top of UK Startups to Watch for in 2020, which have the potential to shake the IT and real world.

1. Why is the UK is a Go-To Place for Tech Startups

Why is the UK a Go-To Place for Tech Startups?

In 2018 alone, 11,864 new software companies were started in the UK, which demonstrated a 14% increase in comparison to the previous year. In addition, the UK tech companies alone attracted “5% of all global high-tech scale-up investment,” more than any other European country. The reason for such a tech startup blossoming in the UK lies not only in the financial and economic prosperity of the country but also in the appropriate environment for innovation that Britain cultivates.

As we mentioned in our UK startups list “Top Young UK Fintech Disruptors,” the UK has been recognized as the best fintech hub, the fifth most innovative country in the world according to Global Innovation Index, and the first European tech innovator in the KPMG report. There is a lot of invisible, ‘behind-the-curtains’ regulative and political work along with a great pool of tech talents that are required to achieve such high results and the growing number of new tech startups and innovative apps. The more the UK’s tech sector grows the more skilled workers and investments the country attracts, which creates a positive feedback loop that does not show any signs of weakening.

As you see, the UK provides great grounds for growing top tech startups. Here you have some of the best UK startups that successfully seize this opportunity and build a product with the potential to make a meaningful change. (The companies in the list presented in no particular order.)

With the name that is used to describe a simple but surprisingly warm-effective and robust structure made from snow blocks, Igloo is on the mission to make houses smart and energy-efficient. Igloo provides smart thermostats, hybrid heating, and EV charging in addition to a mobile app that is used to control the smart home’s infrastructure and provide recommendations to decrease energy consumption. Besides, the tech startup developed an app for Tesla chargers that helps to reduce their emissions fivefold by charging cars when the clean energy contribution to the electrical grid is the highest. The app achieves it by analyzing National Grid Forecasts.

Igloo has more than 85,000 users, and most recently, the company announced a $20 million investment from a Japanese gas company Osaka Gas Co. Igloo’s mission to decarbonize British households is important to the UK’s aim of becoming carbon-neutral by 2050 to address the climate change issue.

We move from smart houses to smart vehicles. Smart car developers — FiveAI — have an ambitious but much-desired goal to create autonomous transport systems in European cities. The final purpose of this AI tech startup is to make transportation quicker, greener, more accessible, and ultimately safer.

In April 2019, FiveAI launched an autonomous route that carried volunteers through busy London streets. So far, the company has secured almost $38m of investments and has offices in 6 UK cities.

Overall, FiveAI has quite a difficult task as far as the streets of European cities are generally more twisty, busy, and narrow than the roads of the US cities where the biggest autonomous cars manufacturers are active. So, we wish them the best of luck; they definitely have the rest required for success.

It would be a mistake to not include Monzo in this list of top UK tech startups considering the significance of the fintech sector in the general and rapid growth of this promising digital bank in particular.

Monzo is among the best UK fintech startups. It is a digital-only bank that provides users with accounts and a variety of banking and money management features. Monzo preaches the intuitiveness and simplicity of the UX. As of the end of 2019, Monzo had more than 3 million users with an additional 200.000 clients every month.

Monzo can surprise the world of finance even more in the near future.

Gymshark proves that the clothing and digital retail endeavors are still going strong regardless of the market’s saturation as far as they are properly promoted and equipped with a relevant and appealing website. Gymshark is a booming activewear brand with international delivery and a masterful digital marketing team.

Founded in 2012, by then still a student Ben Francis, GymShark is among the top of the private companies with the fastest-growing profits. Gymshark is the face of the future digital retail and a stylish one.

This list also wouldn’t be full without Babylon Health, a major digital healthcare player, which has an astounding yet controversial effect on the UK’s healthcare industry. Babylon Health provides remote consultations with doctors and chatbots that check patients’ symptoms.

The company’s influence on the industry is so significant that NHS had “to reallocate millions of pounds in funding to mitigate for the disruption it has caused.” Nevertheless, the company grows strong. In 2019, it closed a $550m funding round with the final valuation of more than $2bn.

Babylon Health’s disruptiveness is proof that we better keep an eye on it. It’s quite possible that Babylon’s future will largely determine the future of similar digital healthcare efforts in other countries. This healthcare provider has all the chances to achieve new heights of the industry’s efficiency and affordability.

When the deal gets to the future of tech, especially in the new decade, we simply can’t neglect robotics. Robotics excites our imagination and entertains the mind. At the same time, Karakuri makes dreams of robots a reality. The high-tech company created a robot Marley, which can serve up to 120 meals with customizable portion size and nutritional value per hour and minimize waste; and DK-One, which is the first robotics solution for high throughput and fast turnaround.

Karakuri raised $9m in a seed round and was named one of the hottest startups. Karakuri has an interesting future and everything required to make robots useful and prevalent.

We move from one high-tech startup to another that tackles ideas on the intersection of several complex areas of knowledge. LabGenius is an ambitious biopharmaceutical company developing next-generation protein therapeutics using a machine learning-driven evolution engine. Their mission sounds as wild as it actually happens to be.

So far, the company has raised $10m in Series A funding and made the first but significant steps on the road to its goal. LabGenius’s success will mean a revolution in the area, and we believe they will achieve it.

Cybersecurity will always be a place for innovations, and Darktrace proves it. The company provides an AI-driven cyber defense service, in other words, “AI and unsupervised machine learning to autonomously detect and take action against cyber-threats across all diverse digital environments, including cloud and virtual environments, Internet of Things, and industrial control systems.”

The company has a plentiful of awards and an impressive $1.65bn valuation. As cyber-attacks become more sophisticated and utilize more exquisite technologies, the protection of data should be one step ahead to prevent major damage. Darktrace can provide this critical advantage.

In a world where we produce a surplus of food and yet a lot of people still suffer from malnourishment, such a startup as Olio can make the difference. Olio is a free app that connects people who have surplus food with people nearby who don’t have enough. The former take photos of the food they want to share, while the latter receive notifications and can choose the desirув option and take it away.

Olio secured $6m Round A funding and has almost 1.5 million users who shared 2.5 million portions of food as of November 2019. Olio is not only successful but also a much-needed application that helps people appreciate food and share it more. Not throwing any food away is quite a utopian idea, but Olio makes it a little closer to reality. Watch closely, and perhaps, you will be the one to follow Olio’s example and start something similar in your country.

Thought Machine develops a cloud-native technology for banks to help them go digital or switch to newer technologies painlessly. So far, Thought Machine partnered with Lloyd Bank, became a Google cloud partner, made it to Fintech 50, was selected by SEB (Іwedish banking group) and Hong Kong bank, Standard Chartered.

In the world of digital banking, where obsoletion can be a matter of months, Thought Machine’s initiative is much needed. Keeping up with the pace requires significant investments of money and time, and the proper platform for digital banking can make all the difference.

The future is approaching. And you can observe this future in the small chunk of the visionary tech-driven companies we included in our list of the Top Uk Startups to Watch for in 2020. This list does not do justice to the rich variety of amazing tech companies that grow in Britain. However, it demonstrates the scale of the evolution that is happening in the tech industry right now. We believe that with proper support from IT professionals and a relevant idea, anyone can become a part of this evolution.

We are a full-cycle software development company with a great proposition for startups and extensive experience in various industries, including fintech. KindGeek takes pride in the fact that we helped entrepreneurs to develop successful products.

We would be happy to help your dream become a reality as well. Contact us if you want to know more about our possible partnership.

By Yuliya Datsyuk
8 Mins read
Currently, up to 70% of the UK’s population uses digital banking while 12% switched to digital banks completely, and ⅔ of the population want to follow their example according to Finder’s statistics. In addition, the UK neobanks expect to triple the number of their customers in the following year. The UK’s example demonstrates amazing opportunities for digital banks to seize, while Deloitte’s research predicts 3 billion digital banks’ users globally by 2021. The global market’s opportunities are ripe to harvest; you just need a relevant product to do it.