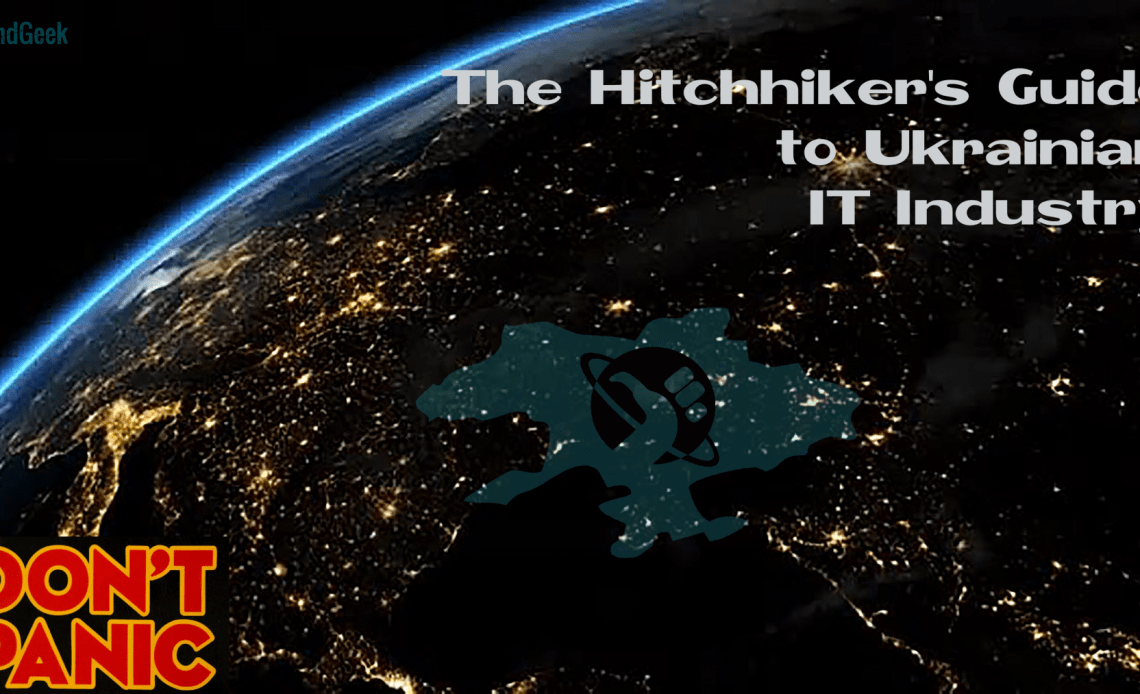 The Hitchhiker’s Guide to Hiring a Development Team in Ukraine: Part 2

A Picture of an Average Ukrainian Software Developer

What Software Products Were Developed in Ukraine?

Part2: What Sets Ukrainian Software Development Scene Apart From Others?

A Picture of an Average Ukrainian Software Developer

According to the most recent statistics, there are approximately 50,000 software developers in Ukraine and 90,000 IT professionals. It means that every 880th person is a software developer considering the total population of Ukraine, or every 520th, considering working-age people, which is a huge number as Earthlings are quite capable of inventing professions: there are thousands of them. (Yes, humans like being busy, unlike dolphins)

As you see, a Ukrainian IT professional exists in a densely competitive environment and should put a lot of effort in order to be noticeable and demanded. So, come to think of it: an average Ukrainian Developer is not so average. Most often, such a professional is a persistent and eager to learn person with higher technical education and a fair share of stubbornness that allows him or her overcoming frustrations that are loyal partners of this profession. And last but not the least attribute is fearlessness at the face of all these new fancy things including Blockchain technologies, Machine Learning, Big Data, etc. If they need to use something they don’t know, they will learn it in a timely fashion.

The most prevalent programming languages among Ukrainian developers are Java, C#, PHP, JavaScirpt, and Python. However, there is a developer for every need regardless of whether you want to develop a product using the above-mentioned languages/technologies, or any other technology stack.

There are quite a few fairly powerful IT outsourcing destinations on the planet. Some of them are known for the cheapest workforce, but at the same time, they may provide service of the … doubtful quality. Here Ukraine is near that desired golden middle between two extremes: the labor-force is inexpensive if compared to the rest of European or American countries that actively outsource, while Ukrainian developers are well-educated and skillful.

As you see, Ukraine has quite a staggering number of engineering graduates, and such a trend does not seem to cease any time soon because Ukrainian youth enjoys the idea of being at the edge of technological advance. Call it a cultural peculiarity that developed because of historical circumstances. Moreover, this Human Capital Report by World Economic Forum, which evaluated countries based on their talent pools, ranked Ukraine 17th out of 124 countries in the 15-24 age group,

Earth is a tiny planet, which, however, is still saturated with an unfathomable variety of dramatically different cultures the amount of which even some of the biggest inhabited planets of the Galaxy would not be able to contain. Each of these cultures has its peculiarities and cultivates unique mentalities. Sometimes, it can be an obstacle to a productive partnership as struggling over cultural differences is what Earthlings do exceptionally well.

In this regard, working with Ukrainian software developers and IT professionals is easy because the cultural compatibility of Ukraine is high and people in the industry are open-minded and communicative (at the same time, most IT professionals speak English well, which is important on the planet without Babel fishes).

What Software Products Were Developed in Ukraine?

It is difficult to know for sure what products exactly were outsourced to Ukraine due to the prevalence of NDAs, so we can only guess whether some of the products that we use were developed by Ukrainian companies or not. Yes, even though people of Earth love secrets, love knowing secrets of other people, and absolutely adore sharing secrets, there is still a lot of kept-secret information.

However, we still know about some bright examples of software that was outsourced to Ukraine. You can read more about it in our article on Startup Outsourcing. In addition, some global business giants have offices or development team in Ukraine: Samsung, Microsoft, WhatsApp, Oracle Skype, Magento.

Remember, Ukrainian Software Development companies are legion and you should be considerate and thoughtful about your decision. Do your research, compile a list of companies you consider suitable for a mission. Don’t be afraid to ask Ukrainian software development companies for examples of similar projects they developed, feedback from previous partners, or recommendations. Communicate with them freely, without any worries or anxieties, they will feel it and provide you with the most excellent service you can find in this part of the Galaxy.

Finding that special company you click with and with which you have that special entrepreneurial chemistry may be quite a task. But don’t worry, we have a neat article on these matters, which, hopefully, will make it easier for you:

How to Choose the Right Software Development Agency to Build Your Product.

Also, you can always ask a company for a quote (estimated costs) for your project. Remember: the more detailed your description of a project is, the more accurate quote you will receive.

Finally: even if you find Earthlings weird or eccentric, remember that they are empathic and compassionate kind of creatures, and they will gladly share experiences and help make your idea a tangible reality.

This is all for now. Earth is tiny, Ukraine is even more so, but that is where some great opportunities await. Do not neglect the possibility to visit and check for yourself.

I think you are hungry now. Let’s go and “take in a quick bite at the Restaurant at the End of the Universe”.